By Tom Smith November 14, 2012
I had an interesting meeting with the Law & Management team about the possibility of using a Collaborative Inbox ( which is a kind of Google Group ) rather than our current in-house issue management system.

We went through what they wanted to do when people report problems and they came up with a heap of great questions. With almost all their questions, my answer was, "Ooh, I'll have to look that up and get back tomorrow". Here are the answers.

For the purposes of trying to answer the questions, I am using a Google Collaborative Index Group called "Silly Questions" which has been set up to allow people to email it ( without being a member ) and has two members ( Mike and I ). I will be mailing the group from a test account called "Not Tom".


Q1. Can an issue be automatically given an ID?

This was an based on someone having mailed in an issue, then later calling in and being able to refer easily to the particular issue. An ID can be the quickest way to identify the thread the person is asking about.

Whilst each thread does have an ID, like this SQrl8LBy48Q, that is quite long, impossible to read out reliably and can't be searched for - you'd have to hack the URL to get to the particular thread.

... returns all messages from them. But it is entirely feasible that somebody might have dozens of issues on the go. 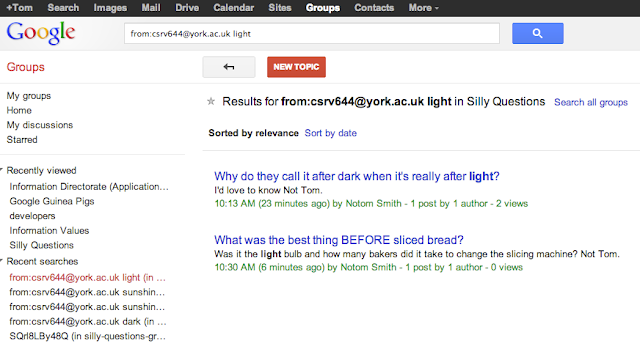 Adding a search term (light) from their title helped limit the results (see above) but you can also limit them by adding a tag, assuming the message has been tagged previously.

Note: Thinking deviously, you could potentially tag each new thread with an "ID tag". I looked to see if there was an API for Groups where I might automatically attach an ID to each new incoming message and email the sender with a message with that ID in. There isn't an API to Google Groups! Boo!

Mmm?! I wonder if you could achieve this with the GMail API and AppsScript? You could set up a script to check a given email account once a minute and if there was a new thread, then send a mail replying with an edited subject line containing the new ID.

You could potentially generate and assign an ID for each incoming message by hand, but more realistically, getting into the practice of tagging issues as they come in might
a. Enable you to find them easier later ( if someone phones in for example )
b. Result, over time, in a useful categorized resource.


Q2. Can an issue be raised on behalf of someone?

A lot of the questions regarding Collaborative Inboxes fall into a "Hang on, what's the simplest way of doing this?" category. In this case, my alter ego, "Not Tom" sent a question to the Silly Questions group and CC'd in Aimee ( see below ). 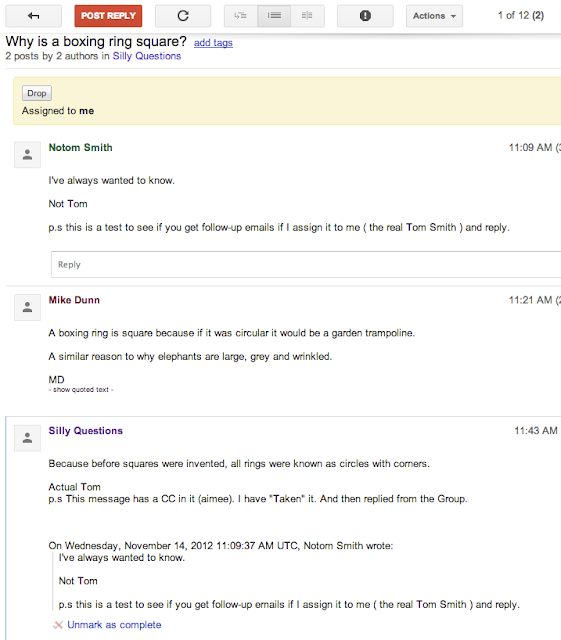 Although Aimee isn't listed in the view ( above )... when the Real Tom goes to reply, anyone CC'd in is shown in the reply form ( see below ). 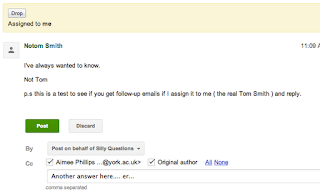 Q3. Can you piggy back an issue, being kept in touch with any solution found?

I think this is again handled by being CC'd in to a thread.


Q4. If a thread has been assigned to me, who gets an email when I reply to it? Can other members see what the solution was?


Yes. During this I discovered that if you "Take" a thread and assign it to yourself, everyone else still gets an email, so in the example above, both Mike and Aimee will have a reply. And the thread is visible in the web interface.

Yes. If you add a tag to a message, people can search for messages with that tag.

Q6. If a thread is marked as "complete", what happens when someone replies to it again?

The thread is moved back up the lists to the current threads and marked as unread.

NOTE: You can "Lock Replies". If someone then replies to a locked thread, a new thread is created but the reply-er, in this case Aimee, is oblivious to this fact. See below where Aimee has replied to a locked thread.

NOTE: You can mark any reply as a Favourite, by clicking the star icon, but these are personal to you. This is a design mistake in my opinion. They should be global favourites.

NOTE: There is the concept of marking a topic as "Best Answer" but I think that, maybe because I've already participated in my Group that I can't change a question type. This may be a bug. Found it! In Manage > Information > General Information if you select "Allow users to post to the group on the web" then your ability to change your Topic types is disabled. Why I have no idea.

Q7. What's the difference between an Email List and a Collaborative Inbox?

Not much. With each of the "new" Google Groups types ( Web Forum, Q&A discussions ) you pretty much get the same feature set but with a few add-ons and LOTS of configuration options regarding who is/isn't a member, who can post, who can moderate etc.

Whilst Google Groups itself doesn't have an API Google Groups Settings API does. And yes. It's a good  ( and challenging idea ). I could imagine two approaches working.

Hang on, that's not a Google Groups question. Because it doesn't. See why and that it's coming real soon ( not ).


Q10. Can Collaborative Inbox Issues be integrated with Footprints?

The notion here was that, if an issue had no resolution then could it be passed into the university issue management system?

The obvious answer is that a message thread can be forwarded to another email address, so I guess, yes is the answer.

Alternatively, you can "Move" a thread to another Group. I believe this to be groups for which you are a Manager, so were our department to use Collaborative Inbox, we might need to create a new role which would allow a non-member to Move threads into our space. This needs verifying. I think it may be doable. 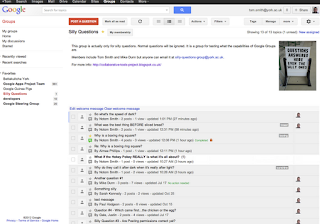 The hard part about answering these questions is that you need more than three accounts to verify what the public, members, other roles and admins can and can't see and do. Simulating collaboration well is almost impossible. Still, my Silly Questions Group is now looking good ( see left ) and it looks like I need a few more daft questions to go at.

If anyone at York would like to be a member of the Silly Questions Group so they can trial the Collaborative Inbox features without the bother of setting one up, click the Apply for membership link on this page.