The Next Generation of Aggregation and RSS Readers

What is an RSS reader anyway?

Avoiding the technical specification of what RSS is... it is just a way of collecting explicit subscriptions to news from various sites. It is markedly NOT email.

Along the way, RSS forgot, or were told to forget, they were also aggregators. Aggregators were cousins of RSS readers in that they collected lots of news together and re-published it, normally as a web page. In the olden days ( 2005ish ) there were lots of aggregators. There were tools to make your own aggregators and aggregators were important, in my opinion because they did the hard curatorial work or selecting related news sources and making them available, normally in a format you could subscribe to.

As more and more people came online, producing news, consuming news, many aggregators - who were normally making no money whatsoever - went to the wall. Most desktop-based RSS software tools simply failed under the demands of people who had thousands and thousands of subscriptions. Google Reader, one of the few tools that seemed to handle this scale, slowly wiped out both other RSS readers ( online or desktop based ) AND aggregator tools and sites.


The Next Generation of RSS Readers

The next generation of RSS readers, weren't really RSS readers at all. Tools like
Flipboard and Feedly looked to broaden your news reading reach to bring you both the good stuff and also include your personal connections. One of the big problems with RSS was it's subscribing mechanism, which to this day is way too geeky really. Just explaining to someone what to look for if they wanted to subscribe to a site was a usability nightmare. "It will be called RSS or Atom or Latest Entries" or maybe it's in the source code, oh it might have an orange icon or be called XML".

Removing the "subscription" aspect from news reading kills it dead. The loathsome Summly, is a good example, bringing you the sort of news worse than you find in a free newspaper scattered all over the bus floor.

Feedly tries to extend your news reading range, but in my opinion, does it poorly. One of the BIG problems with new subscriptions is that after a while you get bored of them. Your interests change and migrate and a good news reader tool should allow this to happen naturally and not try to do it, with AI magic, for you.

Where They're All Going Wrong


In an article called Produce Organise Consume ( Jan 2011) I point out the strange division between "bookmarking" or tagging, blogging and reading and that for me they were essentially different aspects of the same thing.

These similar activities start to really come into their own when they start feeding the others. When what you are writing about, or bookmarking starts affecting what you are brought to read, for example.

The hidden glue in these three blobs is Connection. Those connections might be explicit, based on another connection or deduced or part of some fantastic artificial back end joining mysterious pieces together ( although probably not ).


Production and Consumption have moved to Twitter and Facebook ( Google+ maybe ) and Organisation lurks in Twitter hashtags and trending topics, loosely joining things together. Bringing these three activities together shouldn't be too hard. I don't even think it needs one uber-tool to dominate how they happen ( people are very pernickety about how they work ) but it does need to be thought about.

And it's clear that Google aren't thinking on these simple basic activity lines. Where Google Keep fits into my model is obvious, it's an Organising thing - but it doesn't fit well with the Production or Consumption thing, and it really could. The same is true of Google+ which fails awfully as a tool of Production or Organisation ( it'd be nice to see a page of the hashtags I'd used for example ).

Can I Make My Own Aggregator?

There are remarkably few open source tools to run aggregators that I liked, Wp-o-matic and Planet Python being exceptions in that they were easily adaptable into something else, but still far from ideal. To be fair it's years since I looked but I recall trying HUNDREDS of them.

My aggregator would need to be:

The parts that already exist


You've probably guessed that the parts I want to work with are Google Spreadsheets, Google Docs and Apps Script. I don't think I can use a ScriptDB or Fusion table because there would be just too many read/writes to their databases even though they deal with large amounts of data very well.

It would be possible to create an aggregator that collected, say less than a thousand feeds and saved the articles in a Google Spreadsheet. But it's worth paying attention to Google Spreadsheet limits and quotas.

Spreadsheets: 400,000 cells, with a maximum of 256 columns per sheet.
Number of Tabs: 200 sheets per workbook
Note: The limit on the number of ImportHtml functions per spreadsheet is 50. (from @mhawksey)


So, if I used Google Spreadsheets I might have to have monthly rollover, creating a new spreadsheet for each month. And so that connections between items ( via tags ) worked across months, I might need to render them as HTML and use Google Drive hosting to serve them.

I'm just mulling over if making a very simple aggregator with Google Parts is sensible or not. I would still like to be able to show a TagCloud of news concepts from all the various social media corners of the University of York like the one shown below ( from  of my PPPeoplePPPowered project in 2010 ). 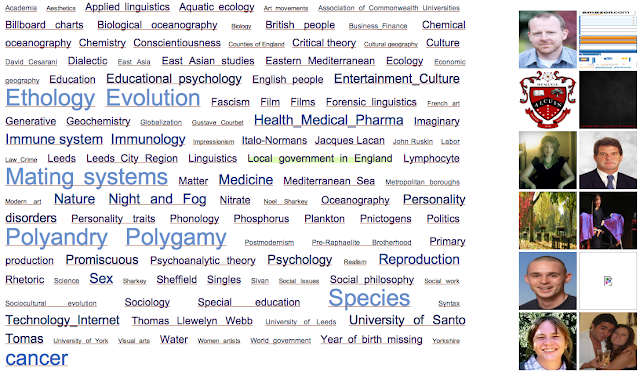 And most interestingly ( to me ) was the ability to connect people and concepts in a network. This was achieved by processing each news article using Open Calais for the concepts contained. 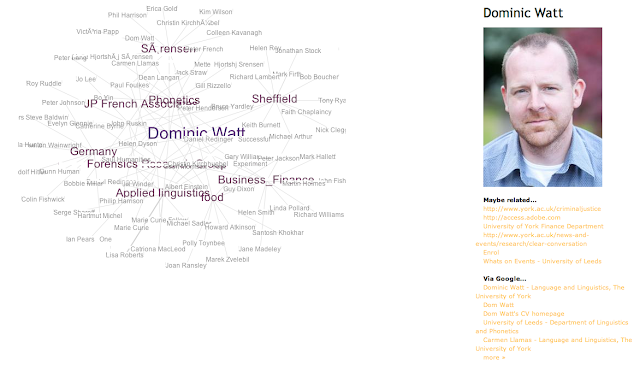 I think what I'm trying to say, that in order to convince people that there is real value in working with blogs ( or whatever means of online connected Production ) you need to "hook them" and show them an explicit example of how everything fits together, but that example can't be one you have chosen, it has to fit their world model.

An real life example I've worn out a little from overuse is when, showing a lecturer how blogging works I suggested they added a tag to their post. They added the tag "ahrc" to a post about working on a funding bid. They clicked the tag and found another lecturer in another department working on the same bid. He said he'd immediately go for a chat and see if there was an opportunity for collaboration.

This stunningly simple example can be made to happen over and over if only we can connect the ephemera of writing and reading and organising from wherever people are doing. I think an aggregator of tweets and wiki edits and Google Site updates and blog posts from York staff would be a start in letting a lot more people into this area of what can seem at times, just too geeky for some.