The Problem With Google

By Tom Smith October 29, 2014
I'm too old to be fan of technology, but I quite like lots of it, and you can't argue that Google have definitely taken the lead on collaboration. At the core of all its products is the idea that what you are working on, you will want to involve other people, as collaborators, as commenters, as mentors or viewers.

Google's model of collaboration best matches a small business and individual. This is reflected in how Google Drive works.

For example, in Google Drive, if you create a file, only you can delete it. That's great isn't it? Except because a file is yours, when you leave the university, unless your admins move ALL your files to someone else, they're gone.

Before leaving the university, you could individually make someone else the owner of one of your files, like this... 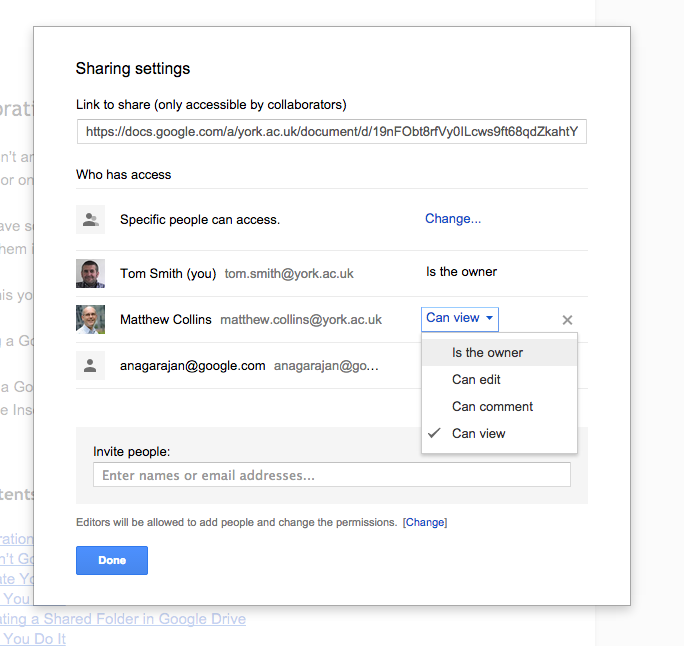 But that is, to put it mildly a bit of faff... and if you put your files in a folder and make someone else the owner of the folder, the files still disappear when you leave ( the files don't inherit ownership from the folder ).

And then, you might get fancy and think you could create a solution with Apps Script.  So I tried that. My idea was to create a "dropbox" and a script to watch that dropbox and when a file is added to it, make a copy ( which I, or a departmental account would then own ). It worked fine. Except of course, the script can't delete the original file - because I don't own it. So, I was left with two copies of the file, one I ( or a departmental account ) owned, and the original. Sigh! ( The code below doesn't work by the way ) .

Maybe you could write a script to simply move your files to someone else. Except you'd have to get  pretty fancy and page through your files if your script would need more than 9 seconds running time. Whilst this might seem like a good idea, you can't transfer ownership of a document to someone at another organisation.


What The Problem Is


The problem is that Google files are so tied to an individual. As an organisation, you need to be able to have documents that aren't tied to individual, but are tied to a role or a department.

More subtly, you don't actually want any one university to own the files ( even if this was possible, which it isn't ). What is required is a form of shared ownership.

So Come On Google

Collaboration is your thing. I know these are easy problems to solve, but you can't argue that at times, we might not want to an individual, we might want our work to have longevity beyond our involvement and we might want to work fluidly with other organisations.

At the moment I have someone asking, "We want to set up a five year project and share documents with three organisations. How do we do it with Google Drive?" ... and unless your view of collaboration is one where the documents are fleeting ephemeral things, rather than lasting records, there isn't really a Google-shaped solution that makes a lot of sense.