By Tom Smith November 15, 2013
I thought I'd share this ongoing project I've been working on about creating workflow support for a team. I've referred to it before in a blog post called Using Spreadsheets Instead of Forms, in which I argue how using the commenting, "live saving", versioning and collaborative features of spreadsheet far exceeds what can be done with a simple Google Form (see below). This is especially so when the data you are collecting is long and complicated. ( Tip of the hat to Tim Saunders who had this idea ).

Having quickly trialled and liked bespoke workflow apps like Kissflow, and also read the documentation for bigger workflow systems like RunMyProcess, we realised that one of our first challenges was to define the mood or tone of this process. It was clear that the process we were trying to support was more consultative and discussion-based than a hard passing of numbers and approvals in a clear process flow. Our process needed to be more about "letting the right people know where they are up to" and asking for input than a mechanistic model.

As we worked we realised that the flow itself was remarkably simple and was mainly about making documents available to people for commenting and letting teams of people know what the status is.

We realised that we could break most stages of the process into simple interactions and added them to the spreadsheet as menu items, for example, "Submit initial request" or "Submit to Team B" or "Reject request" etc.

These menu items do three things:


And to help us to speed up the process of development, we created a Processes spreadsheet that looks like this... 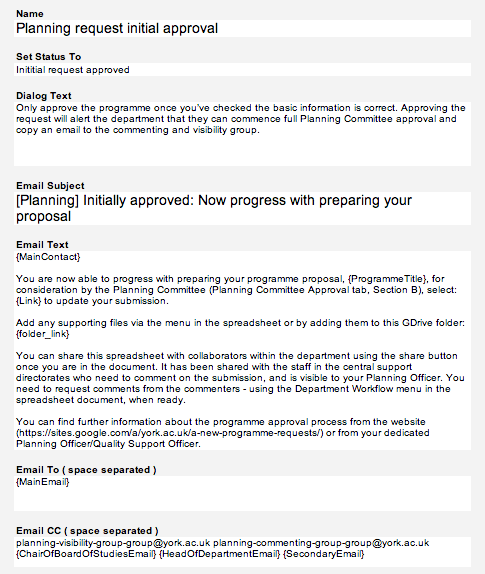 Each process gets rendered against the NamedRanges in the spreadsheet, so that {MainContact} becomes "Joanne Blogs" or whatever. Sometimes, even emails are rendered this way like {HeadOfDepartmentEmail} in the CC of the email that gets sent out.

Some special values had to be sneaked in such as {folder_link} and {link} which means that emails can contain links to the current document or GDrive folder.

Working this way has meant that fine-tuning who gets sent what is a LOT quicker, it not being hard-coded. It makes the authoring of those automatic emails which usually get sent to groups rather than people so that people can easily turn off email notification if need be.

The menu items typically have code that look something like this...

... and the run_process() function simply shows a dialog, renders and sends out emails and sets the status of the request. Some menu items have code that moves a folder to an "Archived" folder for tidiness sake, but nothing too complicated.

I think the thing I learned from this project, once again, is that, like Booking Systems, although they always present themselves at the door as a the same thing, they are always in a clever disguise and really are something very, very different indeed. And by the time they've got through the door and taken their coat off it's already too late.