Using Hangouts on Air To Run A Distributed Mini Conference

By Tom Smith November 11, 2013
Sara Perry ( Archaeology ) wanted to run a mini-conference as part of her Gender and Digital Culture work using Hangouts.

The plan was to have two presentations, one from Sara in York and one from Lucy Shipley and Jim Osborne from the University of Southampton. The presentations would be screen-shared. The audio was amplified so everyone in the room could hear it ( of course ).

There'd be some general discussion ( between everyone ) time and then we'd split into teams that discussed the issues raised and add ideas and questions and solutions into a shared Google Document.

The participants, at both York and Southampton were given an iPad that was already logged into the document. Potentially, the "general public" could have "tuned in" via the YouTube stream and if anyone had have been watching it via Google+ then they would have had the opportunity to ask questions of the speakers. They used Twitter for the backchannel in this case though. 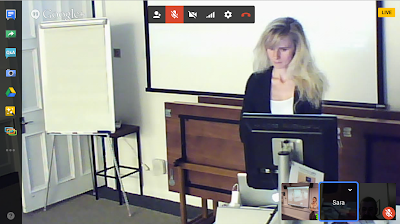 Sara ( as seen by Southampton ) 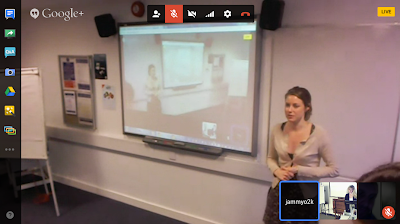 A participant joining the discussion from Southampton 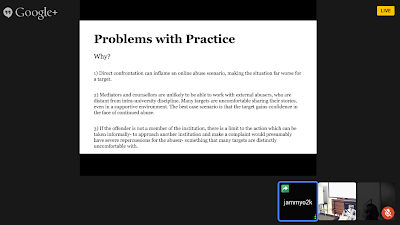 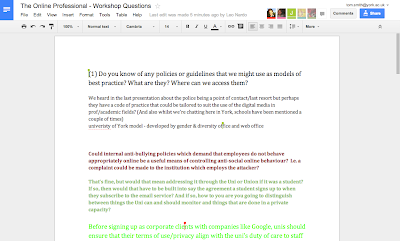 The whole event went remarkably well, there was only a slight glitch when the audio broke up when someone drifted too far away from the microphones. We used regular university wifi and a macbook at our end, with the only difficulty being the fancy footwork required to get a hangout to correctly stream from a second monitor ( Tip: turn off mirroring mac folks ).

You can watch the event here and were I to say "but you had to be there" - you'd see that you really didn't. You could have watched and participated in the whole two hours no matter where you were.