Where Do Good Ideas Come From?

By Tom Smith September 18, 2014
Many people think ideas happen in a flash, a moment of inspiration, that eureka moment. They also believe that it's often "other people" that have ideas, either a boss or lone genius hunting down those illusive light bulbs.

The funny thing is, that the reality is, ideas can be slow things, taking time to come into being and most often they happen in discussion or collaboration. From what I've seen, the best ideas don't come from senior management, or from a sole genius but from people working together, people actually doing stuff in the real world. Many of these "good ideas" can be almost accidental.

My role at the university has been to both introduce people to the Google Apps suite, both evangelising them and working with people to help them realise their ideas.

Here's a story of an "accidental idea" that I think is good and is a great example of what I call "people actually stuff" and collaboration and discussion.

Someone in Facilities in Harry Fairhurst, let's call him Andrew, was talking to someone in the Communications Team, we can call her Jess because that's her name too. They came to me, Tom, and asked, "Can we have a spreadsheet to make the recording of seat availability in Harry Fairhurst easier?"

I didn't know that this information was collected. I showed them how to add drop downs and colours to a Google Spreadsheet. Job done. 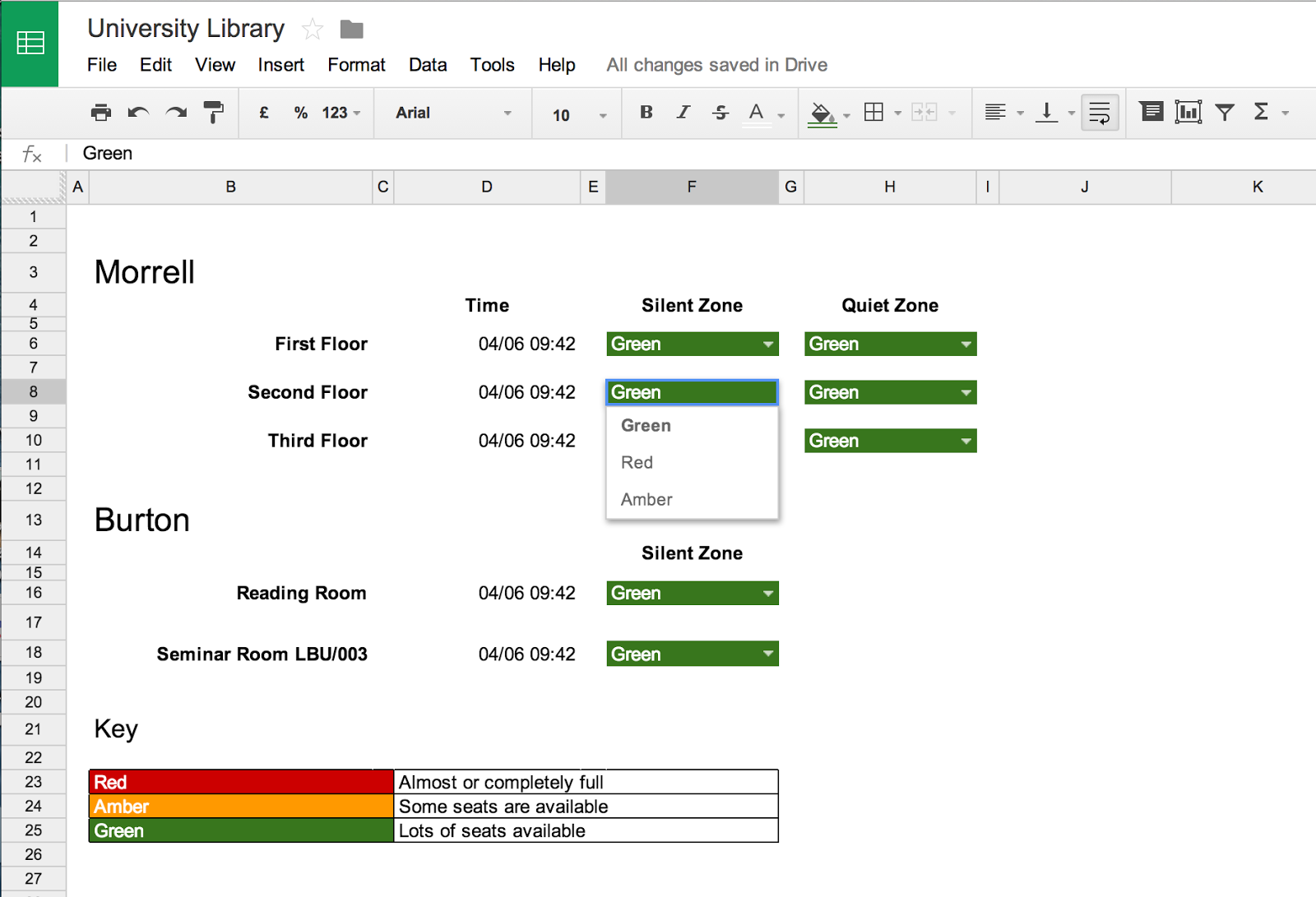 I then discovered that someone actually regularly patrols the building and carries an android tablet. I had the thought that instead of it being a spreadsheet, which was OK but not ideal, it could be an app, better designed for updating on the move. It took me about half an hour to make an app that did that for them, updating the same spreadsheet, using Apps Script. Apps Script is a coding language based on JavaScript built into Google Spreadsheets, Sites and Docs and it's a fantastic tool for people who want to quickly make their ideas happen.


The story doesn't end here. Previously, I'd shared an office with Aimee, who'd discovered that with a little HTML hacking, we could show some Google data on the York website. And so the Jess added the seat availability page to our web site as a trial service. An accidental feature of the technology means that this chart is updated every 5 minutes, rather than twice a day like the web site. 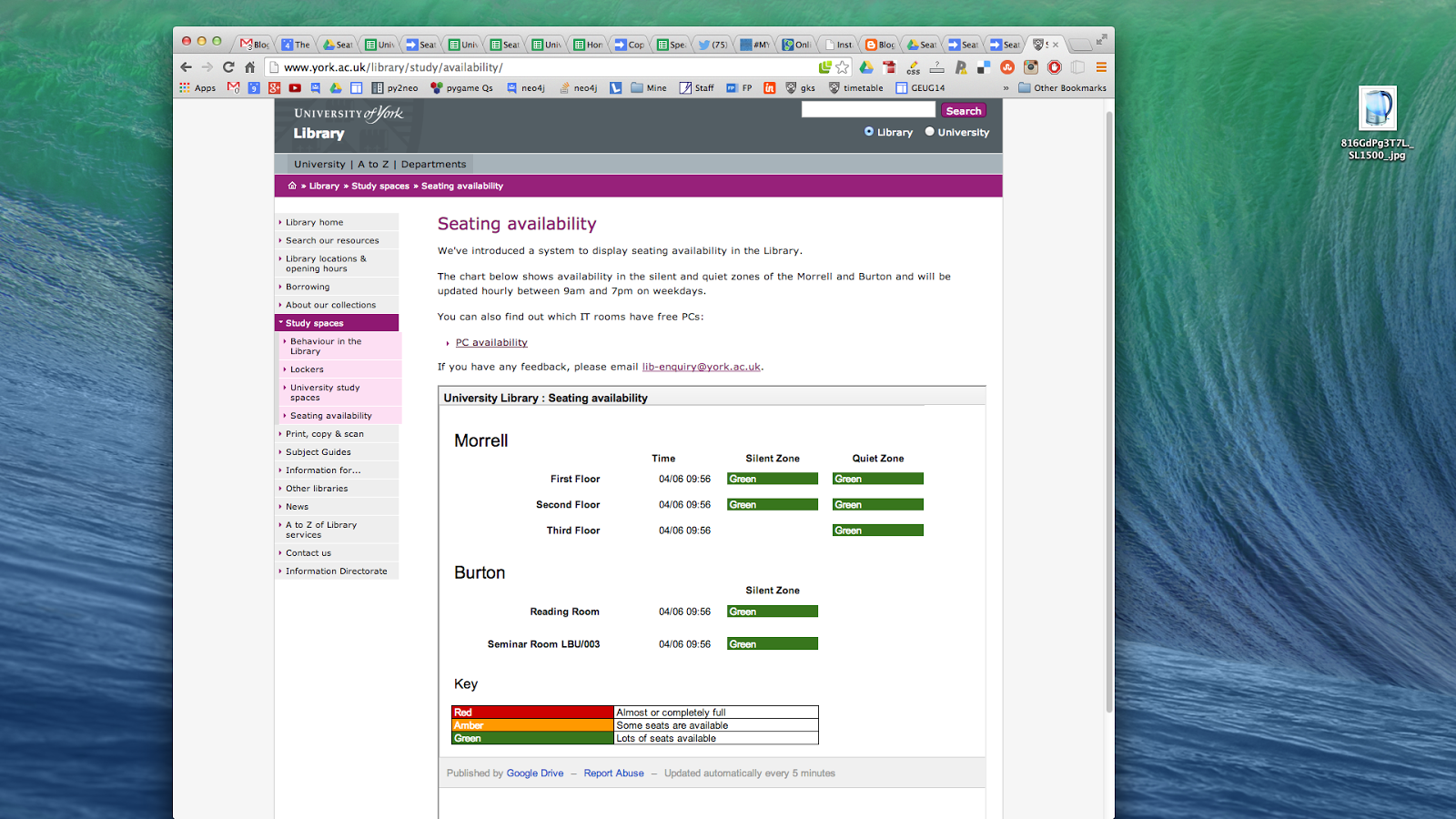 And the story goes on. By now, only days after "launching" a trial service the Communications Team were already receiving positive feedback from students.

function copy_sheet(){
//Simply makes a copy of the main sheet 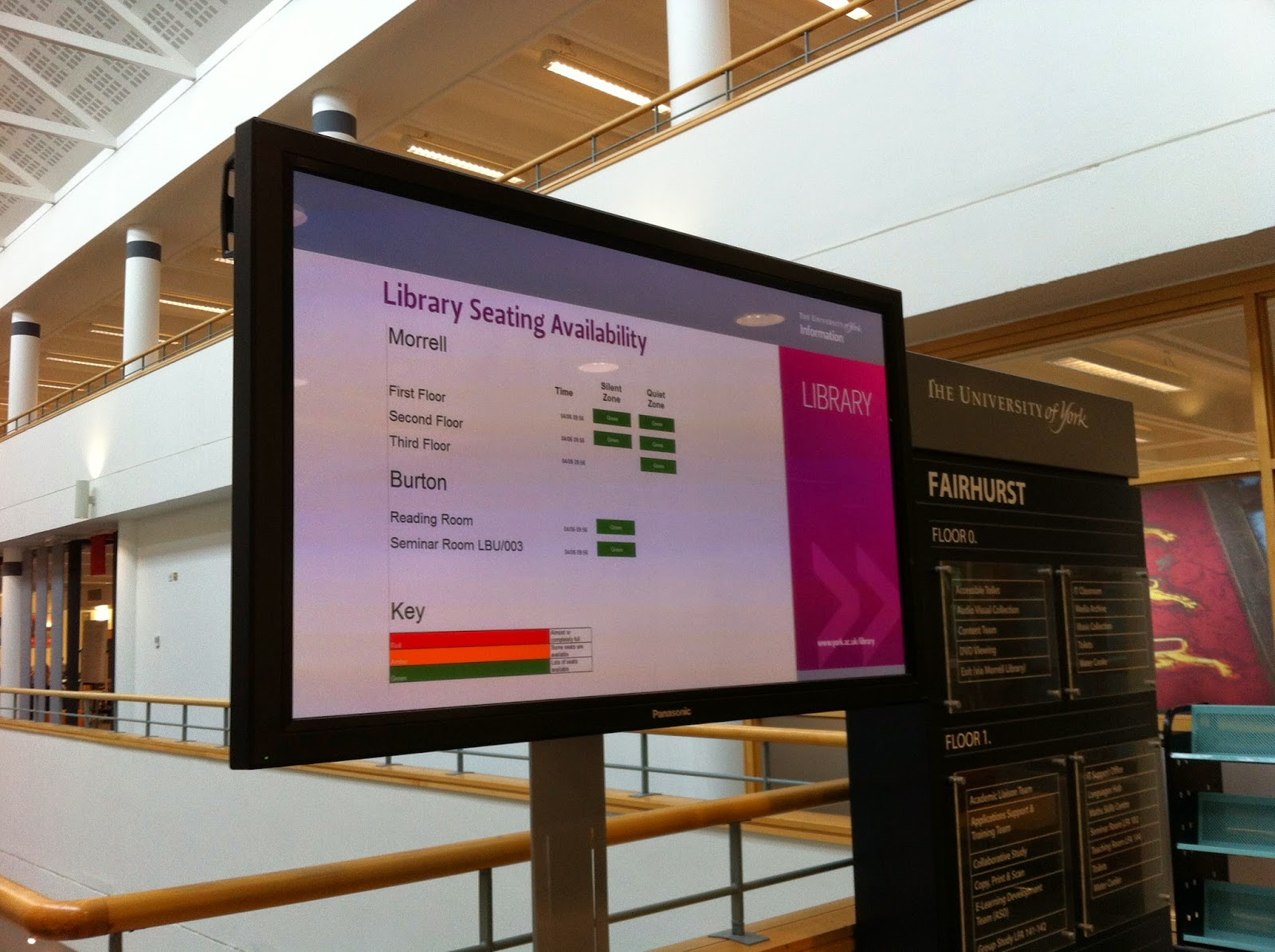 The trial Seating Availability service came into being after chance questions and discussions. It took little to no time to put together. It uses Google Spreadsheets, an app, an android tablet, a widget embedded in a web page and our big screens. It involved at least four or five people.

The is already hugely popular for all sorts of reasons. I heard from disability services that students with problems with anxiety love being able to avoid "nearly full" study spaces.

We will soon be adding extra areas and improving it based on feedback.

If you're still wondering where good ideas come from...