3. Building a Booking System ( the afterthought ) 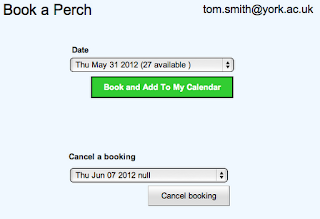 After trying some different approaches like this to the Booking System problem ( see earlier posts ) I had an afterthought.

Someone suggested that "Resource Calendars" are something we/I should look at. Well, as far as I can see, Resource Calendars don't really help see when one of seventy items is free. Whilst the problem looks like a calendar problem, keeping a track of bookings, it's actually the opposite of a bookings system, it's a "What's free?" system.


So I started wondering what seventy checkboxes in a spreadsheet row would look like. I would have to make graphics that showed selected or not and detect which image had been clicked by adding a macro to it. It began to look like this...

... You know how simple ideas suddenly ramp up to complex...  After discovering that ( I don't think ) you can't detect which cell just got clicked, I realised that I'd have to custom write each red checkbox into each cell.

I then tried creating a UI with the UI builder that had 70 checkboxes (one for each perch ). I imagined that you could have a row of these for each day. That might looks like this.

Whilst seventy IS a big number, it ( I don't think ) isn't the biggest number there is. Maybe having a form with seventy items in it might not be a bad thing. Except there is no way to get nice checkboxes into a Google Spreadsheet.

Initially, I thought that "doing it all in a spreadsheet" was a bad idea, recreating a booking system, but after a bit of playing I created this... 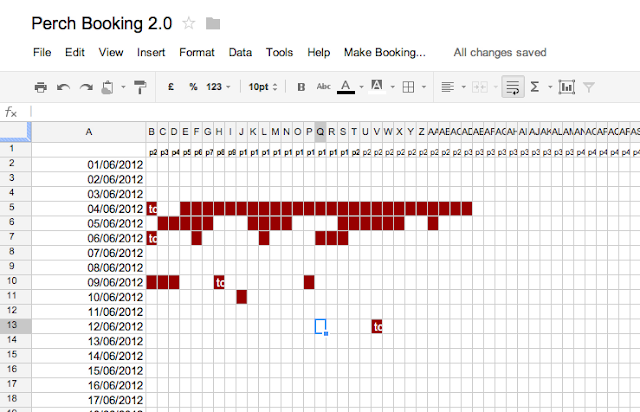 It's just a spreadsheet. You make a booking by selecting a cell... and choosing "Make a Booking" from the menu at the top. The script then adds it to the "Perch Bookings" calendar, sends email invitations ( so that it appears in the booker's calendar ) and colours the cell to red (also adding their email) to indicate that that perch is booked.


Anyone at York can view ( and I think edit ) the Perch Booking spreadsheet here... and make a booking ( hopefully ).

So far, I think this is my favourite solution ( whipped up this morning ) because it does the most, by doing the least, making fewest assumptions. I'll add the code, such that it is, soon.