By Tom Smith May 02, 2012
In a previous post I looked at Google App Engine as a possible means for people at the University of York to quickly create what might pukingly be called "custom solutions" for themselves.

I made an RSS aggregator ( http://uoynews.appspot.com/ ) and whilst it's OK, I must say, having to design this site to handle caching and database calls suggested to me that this wasn't an "everyman" route... Google App Engine, it seems to me is a perfectly good platform for the committed closet geek, willing and able to quickly devour the python language and some low level web development concepts ( like data modelling, caching, task queues and the like)

So, recently I've been looking at much more entry level means to creating web applications. The idea is that I should be able to create a simple form that talks to the Google Homework Sites idea, in which a class of students get a Google Site created for them, in which they enter their homework, and later, their privileges are changed to "read only" so that they can't continue working past the deadline.


So... given that the above idea works at a code level, it'd be good if I could create a form that looked something like this... 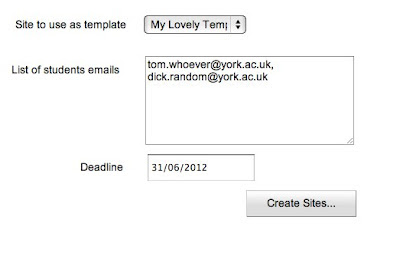 ... so that you can choose ( from a list of your sites ) which site you'd like to use as a template... then select which students should get a copy of the site ( to which they will be added as a "writer" ) and then when to close the sites for editing ( the deadline ). 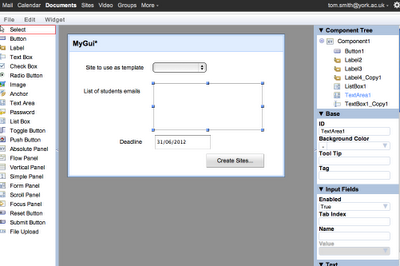 As you can see, it has text boxes and buttons and checkboxes and all the things you might need to create a simple form talks to a spreadsheet, or Google sites or other online tools.

I then discovered our SafariBooks account has an online copy of the O'Reilly book... Google Script: Enterprise Essentials. I'd been banging my head against ridiculously simple tasks in AppScript, this book has already straightened out a few kinks in my understanding.

Although I was originally embedding the GUI in a Google Site, the next step was to Publish As Service just the GUI.

Just people from the University of York can get to it here: https://sites.google.com/a/macros/york.ac.uk/exec?service=AKfycby-a5Irz-qyitYTrNpHLkdKTPBeI2zVOryPbP0YlQ