Building an App at the University of York

By Tom Smith May 05, 2012
A funny thing happened to me on the way to the Collaborative Tools Project this week. Someone had dropped in for a chat and I was enthusing about the creative possibilities offered by both Google App Engine and Google App Script for people "doing it for themselves" and they asked...


"But does anyone actually want to DO this?"

He had a point. To be honest, I don't know. I can't know, but I'm pretty sure I think I know that they do. And then within the week I came across someone at the University using Android tablets for data entry into spreadsheets, where data get moved between sheets based on a workflow and is all presented using lovely looking visualisations. People not only wanted to be doing this stuff - they were already doing it.

So. I said I'd let you know how I was getting on with Google AppScript ( long video here if you want to get started yourself ).

The short answer is quite well. Given that I have a deep seated hatred of braces and semi-colons in programming languages and AppScript is all Javascript-based, I'm not doing bad at all.

The long answer is that I have created a Rock n Roll interface that looks like this... 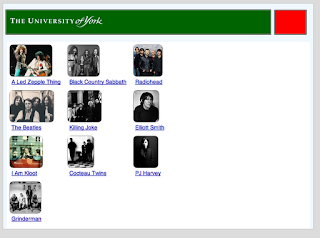 The bit I am pleased about is that the top bit was created in AppScripts GUI builder and the bands were added programmatically from a spreadsheet. What's good about this is that it would mean that our designers could theme applications and programmers could do the other bits.

Another rather wonderful thing is that the app is hosted...

... I know it's not big or clever. But it's available for you to use now. I didn't have to ask anyone to make it available. I've made it available to "Anyone at York" but equally, it might be available to a small project group or department.

That's TWO BIG THINGS... It's there... ready to use ... AND it handles permissions. It's worth pointing out simply because think about what the alternative would have to be, to have an application available to use for University of York staff staff within the afternoon, based on a crazy idea you had in the morning. Tell me how that would happen without AppScript.

Is that, based on the spreadsheet data, a Google Site's pages were populated/published. If you click the links on the apps above you'll see what I mean. It ain't pretty, but it's a start. It means people could potentially comment on any of the bands I've added... or upload files or just access some of the data.

I know what I've made is ugly as sin, and doesn't do much but it's a very encouraging start. Having trialled Google App Engine which I think wouldn't be suitable for "citizen development"... Google AppScript definitely is ideal for small widget-like apps, or quick wizards or simple applications.

You wouldn't want to write Facebook in Google AppScript but those handy dandy applications that make your life more sensible are definitely doable. The only hard part is thinking up the idea.